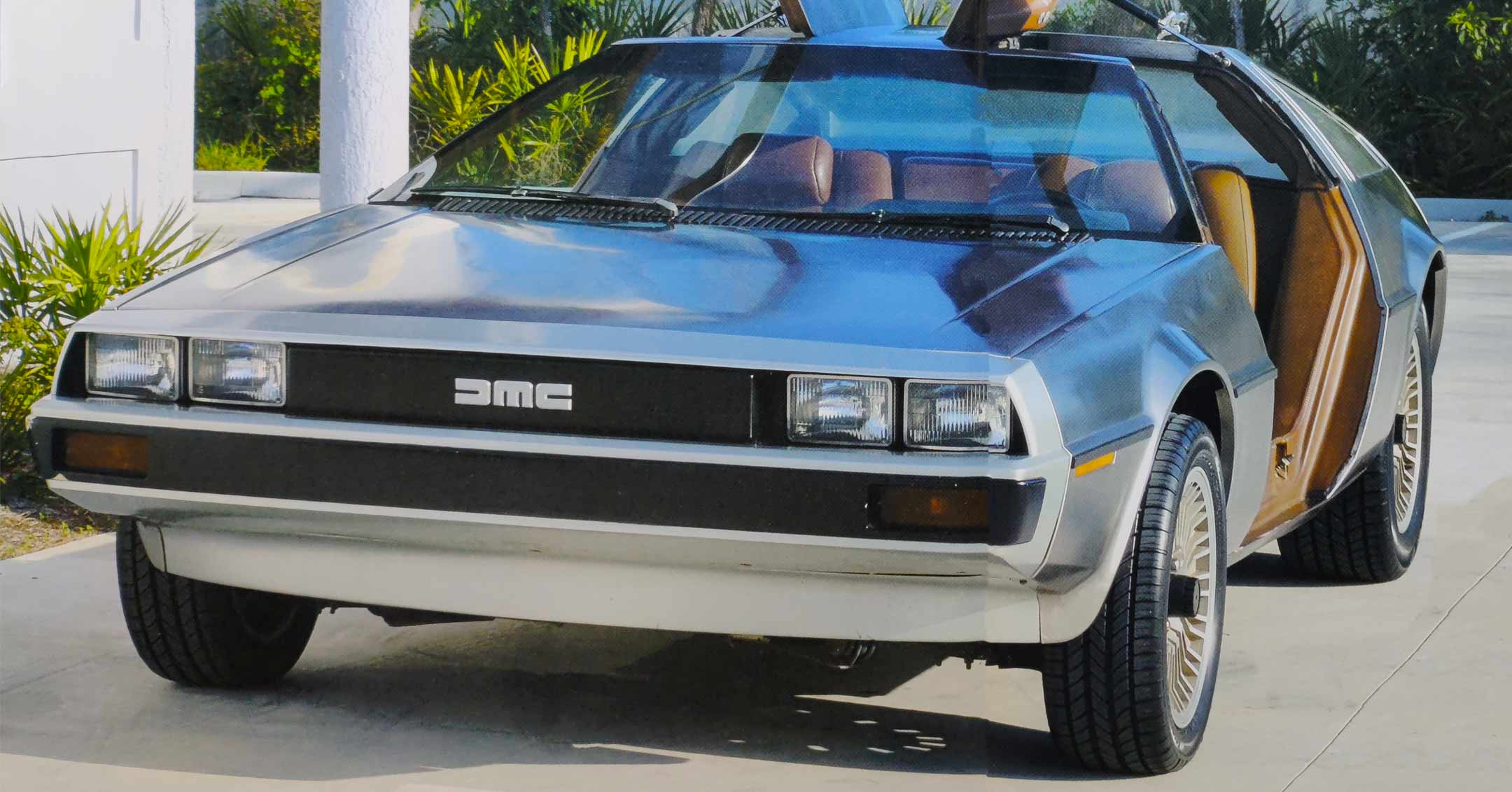 “I don’t have any regrets,” Bill Yacobozzi says. “It was time.”

Still, the former lawyer turned real-estate agent admits it was a little discomforting after Prototype 1 left his home. For twenty years, two months and five days, Bill had upheld a daily tradition. He would walk to his garage and acknowledge the rarest DeLorean in the world. But on January 30, 2005, he paused and was forced to gaze at an empty space. For months it has remained empty – as if nothing else except the Prototype could ever belong there.

On January 11, Yacobozzi told me he had put the car on ebay to see what might happen. “Good luck,” I said. “You’re about to be flooded with emails.” The auction opened with little hurrah. Within a day, however, phone calls were made, internet chatrooms buzzed and the auction counter quickly registered thousands of hits. The price jumped sporadically, and Yacobozzi’s office was barraged with questions… and accusations.

Among the skeptics was Tony lerardi. He had the frequent habit of checking ebay for DeLorean-related items. And there it was: Prototype 1 for sale, complete with pictures from the 2004 summer issue of dw magazine. “I remembered the pictures from the magazine,” lerardi says, “and thought wait a minute. The seller has zero feedback and scanned the pictures.”

It’s a scam, lerardi thought and immediately emailed the seller to say he knew it was fake. Yacobozzi received many emails from angry DeLorean lovers. The auction is phony. You’re a liar, ebay will be informed of this fraud.

A mock auction for “Prototype 2” started on ebay, showing a picture of a snow-covered car with a “DMC” plate. But while enthusiasts lost themselves in the growing, negative propaganda, lerardi  started digging deeper for information.

“I called Ed Bernstein,” lerardi says, “and, as usual, Ed gave me the right phone number and information.” I received a call shortly after. “The next thing I find out,” lerardi says, “Yes, this is indeed for real.”

From here, he faced a hard decision. How much would or could he afford for this car. How much to restore it? Could he allow the Prototype to fall into the hands of a private collector – allow to it disappear for another 20 years? For much of his life, lerardi held a deep connection to the DeLorean automobile. He already owned VIN 6041 – a beautiful Concours winning car. Years ago he had sold it – the car he and his father had bought together. It was a heartfelt mistake he later realized after his father died, and lerardi desperately sought the new owner to buy it back. He had misplaced the information; somehow it had gotten lost over the years. But Bernstein at DeLorean One led him to the new owner, and lerardi got his car back. Now, Prototype 1 was for sale and the auction was ticking. The bid surpassed $75,000. lerardi remembered the car from the videos in the late 70s. He had always wondered where it was now – how great it would be to own. This was his chance. Now. Jay Leno had read the article in dw magazine and called Yacobozzi. He was curious and talkative but not really interested in buying the Prototype. With the auction coming to a close and the bid still rising, Yacobozzi spoke at length with lerardi. Several other parties had expressed serious interest, most notably an executive from Dell Computers. But for Yacobozzi, it wasn’t so much about the money as it was about the car’s future home. In the end, he took the advice from his sources.

He told lerardi, “I’ve heard from people that you’re a man of your word. If you say you want to buy this car, I’ll take your word and end the auction.”

lerardi committed. Yacobozzi ended the auction early, with a high bid of $96,000 and the reserve not met. The final selling price remained private.

When the transport arrived on January 29, 2005, Yacobozzi felt ready. He knew the Prototype would leave him that day. The transaction was finished. It was time to say goodbye. After a two-decade slumber, the car would be brought back to the public eye. And there was something comforting about that. “I felt good because I knew it wouldn’t be sitting in some executive’s garage,” Yacobozzi says. “I knew Tony would display it for his business.”

The business would become DMC Florida in March 2005. With lerardi rampant with preparations to open the DeLorean repair facility, he still found time to feel anxious about his new purchase as it spent a week crossing the states. Even John DeLorean had heard about lerardi’s plans and his acquisition of Prototype 1. He was impressed and expressed interest in meeting the young man.

The transport finally arrived a week later, and lerardi waited impatiently. When the cargo door went up, he was nervous. As the car rolled off the back of the transport, lerardi felt a little overwhelmed. His mind raced back to the images of the past, and it dawned on him. This is it. The first and only surviving prototype’. The one they paraded around America in the 70s. The one Johnny Carson sat in.

This was the car that was filled with John DeLorean’s vision in 1976. The console was full of gauges, including a tire-pressure warning light that would not be fully-realized for 30 years.

“The airbag light, that got me,” Jerardi says. “That got a lump in my throat.” With his car DeLorean had envisioned dual airbags and side-impact door beams. He had worked hard to implement his dream for an affordable and safety-conscious sports car. But with the politics, the bureaucracy, the successes and failures of his car company, not everything had made it to the final product. Over time, people might become skeptical of what John DeLorean had tried to do.

“They’d say, ‘What airbags? That was just a story,'” lerardi says. “But no this is the proof. This car exists.”

“And it all still works,” lerardi says happily. “Electrically, everything seems to be fine.”

The interior was dusty but surprisingly intact. lerardi carefully cleaned the leather and vacuumed the interior. He polished the Plexiglas on the gauge cluster. “We used a carpet-cleaner deodorizer to get rid of the horrendous cigarette smell from every DeLorean Motor Company executive, chain-smoking away in the car,” lerardi laughs.

“Unfortunately we probably took most of the Carson and DeLorean DNA out.”

Now the smell is gone. The interior showed little wear. Mechanically, the car was a different story.

With the fuel cell sealed into the fiberglass mold, getting the car started was a more challenging puzzle. But lerardi wasn’t in a particular hurry. He committed the car to Eurofest in Ireland in 2006—a full year to work on his restoration.

“The car’s never been in Ireland,” he says. “It’d be great to have it running and on the test track in Belfast.”

He also committed the Prototype to Pheasant Run in Chicago that same summer.

“I’ll be there, representing the DeLorean Owners Association,” he says. “I started with the Association in 1990, and that’s all I’ve ever known. The car wouldn’t be where it is today if it wasn’t for these people. Between that club and Ed Bernstein and John Truscott and Stephen Wynne, those people have done nothing but protect the DeLorean.”

“I want to protect the car and its history,” he continues. “I know I’ll never lose money on it being one of a kind. But it isn’t about the money. This car doesn’t really belong to one person. It belongs to the DeLorean world.”

lerardi was thrilled when he heard John DeLorean wanted to meet him. He was prepping his business for the grand opening. He was proud of the thought that he might some day show DeLorean the facility and then look at the polished Prototype and say, “And here’s your car.”

But a call to his cell phone with the news of DeLorean’s stroke caught lerardi just before the grand opening and forced him to pull to the side of the road. The shock reverberated to all of us. We all paused with Tony. And when DeLorean died the following weekend, he struggled with how to pay his respect. The first week’s business was good, but he was ready and looking at airfares to Detroit for the funeral. Finally, in spite of seven customer cars in his facility, he thought of something better.

“As a tribute to DeLorean, I decided we’d close the shop and get the Prototype running,” lerardi says.

The car has two fuel pumps: an electrical one in the fuel cell and a mechanical pump by the engine. lerardi and his mechanics bypassed the fuel cell with two, one-gallon gas tanks – one for fuel going in and a return line. They turned the engine manually to make sure it was smooth and checked the spark plugs and wires. Everything looked pretty good.

It was the carburetor that worried him. The thing was almost 30 years old. The car would never start. Who knew what would need to be done to it. But when they cranked the mechanical fuel pump and fired the engine, the Prototype awoke and came roaring to life.

“Then it idled,” lerardi says, still in near-disbelief, “and we all just stood there and looked at each other.”

They revved the engine and the tachometer went up and then came back down. The car idled again. Prototype 1 hadn’t been started in twenty years, two months and five days when Bill Yacobozzi turned the ignition after the Rick Cole auction in 1984.

“I’ll be darned,” Yacobozzi said when he heard the news and smiled.