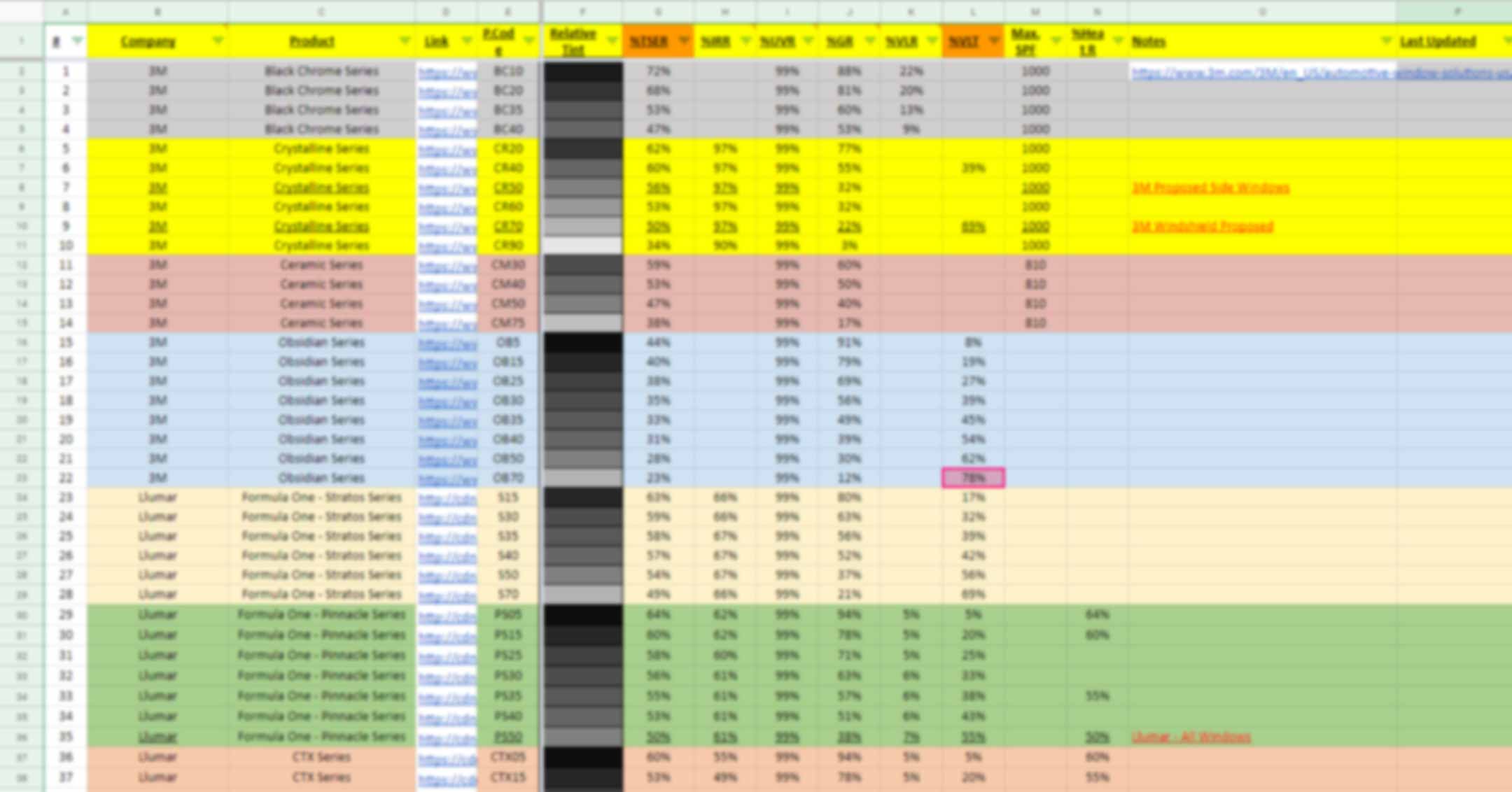 Having owned my DeLorean since 1985, VIN 10987, I have seen the ravages of UV and IR radiation on the DeLorean upholstery, and have experienced how quickly the cabin of our beloved cars can heat up when left in the sun. My wife frequently points out that the sun is ‘most always beating in on her side’ of the car, or that her knees are burning from the heat through the front windshield. My friends, we can do something about this!

Window Tinting used to be something only operators of limousines did for the privacy of their clients. Today nearly every new car comes with tinted rear and side windows. Why? Because today’s window tint films offer privacy and protection from both UV and IR radiation. This translates into less UV damage to your car’s upholstery and lower heat accumulation in the cabin when exposed to the sun. The difference with tint is very noticeable!

I started my search for automotive window tinting, focusing on Crystalline and Ceramic products. I wanted a product that would make a big difference for the money I was spending. There are six basic types of window tint that I have outlined below. Search the web for specific details and distributors for each the window tint product in your area. There are many factors by which the manufacturers rank their products, so, at the bottom of this article I have included a glossary of terms to help you understand.

For me, the key factors are:

Where available, data for more than 70 tint products have been recorded to the “DeLorean Window Tinting” spreadsheet. Within the Crystalline and Ceramic products, nearly every tint option can deliver 96 to 99% UVR blocking, making this an expected baseline objective.

For me, the %TSER speaks to the expected performance once the window tint has been installed. This spec. quantifies to the overall capability of the product and is the one ‘factor’ that all manufactures have calculated for comparing tint products. I was looking for a window tint with at least 50% TSER, and a color that is light enough that the California Highway Patrol wouldn’t notice (and demand that it be removed.)

The %VLT closely relates to the relative tint color. Obviously, the darker window tints have a lower %VLT. The California Highway Patrol code specifies 88% VLT in CA Vehicle Code 26708 paragraphs C1 & E1. However, paragraphs C2 & E2 of the same code reference the Federal Motor Vehicle Safety Standard where a minimum of 70 %VLT is required. With so many cars on the road today using tinted windows, the standards don’t seem to be enforced as strictly. The 2019 Window Tint Specs chart I’ve created shows you the relative color of the Tint films alongside the technical specs.

I visited many auto window tint shops learned that I prefer the Crystalline Series by 3M. If money were no object, I would install CR70 tint to the front windshield and CR50 or CR40 to all side windows of the DeLorean (excluding the rear window.) This will result in a pretty clear front windshield and darker side windows. A second favorable option is the Llumar Stratos Series S70 tint film. And a very close 3rd option is the Llumar Pinnacle Series PS50 tint film. In those cases, I would install either of those tints all the way around for a uniform look – that ‘should not’ be considered too dark when compared to the overall vehicle population on the road today.

Selecting a tint film for your car can be intimidating because there are many types of films, and each film has various qualities. The challenge is picking a film that meets all of your objectives. For example:

Wrapping up, the price of window tinting can deter you from installing the very best product available. In San Diego, I got a quote of $1200 to install the 3M Crystalline products, $650 to $400 for several of the Ceramic products, and the lowest bid for installing a Nano-Hybrid Carbon tint on a DeLorean was $375. Installing a tint film in a DeLorean is a very tedious and awkward task. The front window is very large, but access to it is limited by the small cabin and the rear view mirror is an obstacle for ‘freshmen’ installers. The side windows are easier, but still require a fair amount of skill. To my surprise, the curvature of the DeLorean rear window caused all but one installer to say they would not install tint film there.

I have been in a few cars (not DeLoreans) in which the Nano-Hybrid Carbon tint was installed and found it to be very satisfactory, especially considering this product was quoted at $375 for installation in a DeLorean. Only six of the products I reviewed meet the Federal Motor Vehicle Safety Standard where a minimum of 70 %VLT visibility is required. Selecting one of these products for the front windshield and side windows of the cabin will likely help you avoid conflicts with law enforcement. Selection of the rear side window tint should be more about your need for privacy and %TSER you wish to achieve.

If you have used other materials and have more information for the spreadsheet, please email me at DMC10987@gmail.com.

This spreadsheet has all of the collected data.