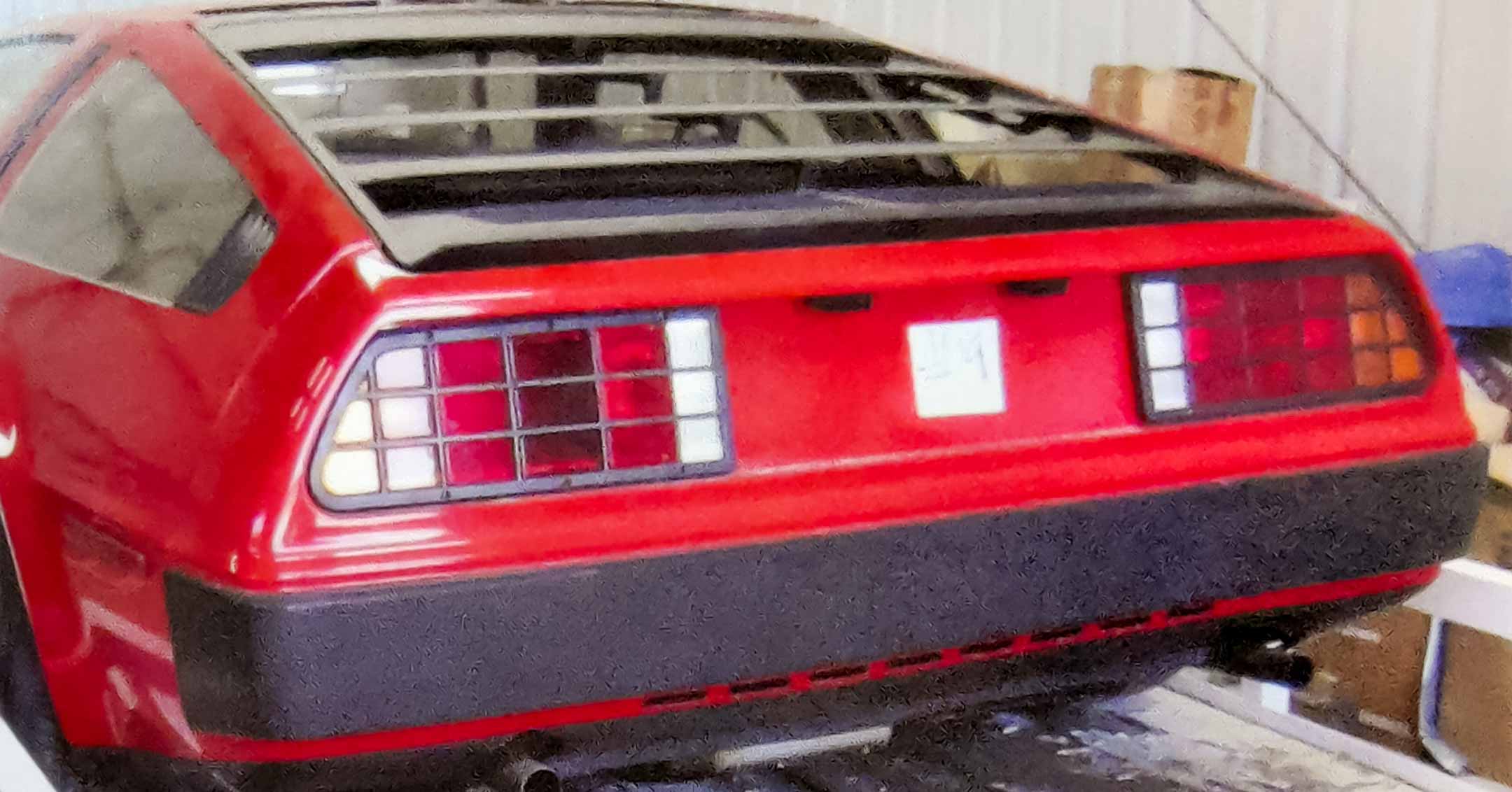 Pilot cars are quite unique to any production run for the automotive industry. They are also never to be seen once a car is in production. These cars are meant to be destroyed and have a short lifespan. What is quite unique about Pilot cars is that one can see the changes, the researched ideas that came to fruition and ideas that were left out. Some ideas in the DeLorean pilot cars may have been changed due to cost reductions like the early seats with lumbar support or the center storage unit. Our production DeLoreans only hint at some of these ideas that were left behind. But with other ideas, maybe it was good that they did change them like the side marker lights flush to the front and rear fascias on these Pilot cars. We can speculate that they were moved more towards the center of the panel for impact reasons. Many other changes, subtle and large were done on these Pilot DeLoreans. For those of you who have been following our DeLorean Pilot car stories featured in DeLorean World Magazine, most are well aware that Pilot cars #20 and #21 have been accounted for and are currently under restorations. To date, we know of only a few in existence and that is why they are so special for the Association to document.

Our journey takes us to the county surrounding Temecula, California. For those of you who are not familiar with California, Temecula is between San Diego and Los Angeles. There has been talk here and there about Pilot #19 but for Sascha Skucek, former editor of DeLorean World and past owner of Pilot #21, and myself, this was the last Pilot car that was unaccounted for by our records. We were always curious on what characteristics this Pilot car would have and to my surprise there were a few. It all started when I received an email, being the Chapter 12 director, asking if anyone had an interest in this unique DeLorean. Many have stated in the past to us that they have a unique DeLorean. But once photos were sent, I knew that this was one of the lost Pilot cars. And it was #19. Rewinding back over a year now, I was also fortunate, with the help of Sascha Skucek to uncover Pilot #20. If was only miles away from my residence. To be a part of two Pilot car findings in my vicinity is quite extraordinary. It is like history passing through your fingers understanding how the engineers and designers fine tuned or changed ideas before production. And Pilot #19 was going to be another adventure. Her name was Kathie Carmer. The alleged DeLorean Pilot car has been sitting for over 10 years now. Her late husband, a former pilot, owned the automobile and used to drive it around the airfield. The DeLorean was known in its day by other pilot comrades. As the car went to rest for years, it preserved most of its integrity.

As the day came to view the DeLorean, my first big amazement was the interior of this vehicle. The interior was grey. We always assumed that the early production Pilot cars would all have black interiors. Even in the early stages of testing, the Pilot team appeared to assemble a car with an interior other than black. It had ail the signs of a Pilot car. The wrapped leather binnacle, center hideaway compartment behind the window switches and the Renault steering wheel to name a few. The unfortunate missing piece of the interior is the seats. The original seats were gone or maybe not ever there but the big question remains if these seats were actually ever grey and did have the early design of a lumbar support as seen in the Visioneering Prototype. The other distinct feature is the center console area and the unique shaping of its contour. Without a doubt, this was Pilot #19 and it would soon be on its way to a new home in Europe. Front marker lights hugging the bumpers. Unique for Pilot cars. The exterior of this vehicle was painted red. Many people wondered why through Pilot #19, #20 and #21 two of them were painted. The simple fact is that these body panels were never quite finished as we know in DeLorean production models. So the stainless steel did not have that beautiful grain as we know of today. Again, these cars were test vehicles and in the early stages of production nothing was held sacred. The owners that did acquire the Pilot cars painted them for this reason. As I looked around Pilot #19 the obvious signs of the uniqueness of this car were the front and rear quarter panels. The side marker lights were indeed flush with the fascias. Also clearly not seen is the embossed DeLorean letters on the rear fascia. When moving to the front of the car, no DMC logo was present on the grille and the front impact absorber below the fascia was unique in shape. The grooves in the hood of the car are significantly deeper in Pilot cars. One will only tell once the red paint is removed during restoration. Standing back from the vehicle, one can notice the ride height of the Pilot car. It was significantly lower as in all DeLorean Pilot cars. The DeLorean also had low mileage and looking into the engine compartment, it appears that this vehicle was a good candidate for resuscitation. Oddly enough, the wheel rims appeared to have a dark shade of grey on one wheel and a lighter shade on another. These Pilot cars were not out to win beauty contests at the time but used to provide the consumer with a solid production vehicle. It was another great privilege to see a Pilot car and to conclude on the mystery of the whereabouts of #19. The importance of the Associations role was to ensure that this DeLorean would find a good home and undergo a proper restoration once to show its light again in the DeLorean community for all to see. As the DeLorean sets out from the harbor of Long Beach, California on its way to Europe, we wish it safe passage to its new home and another unique DeLorean automobile will be preserved in the history books of the DeLorean Motor Company.

Story and photos by: Tony Hilger