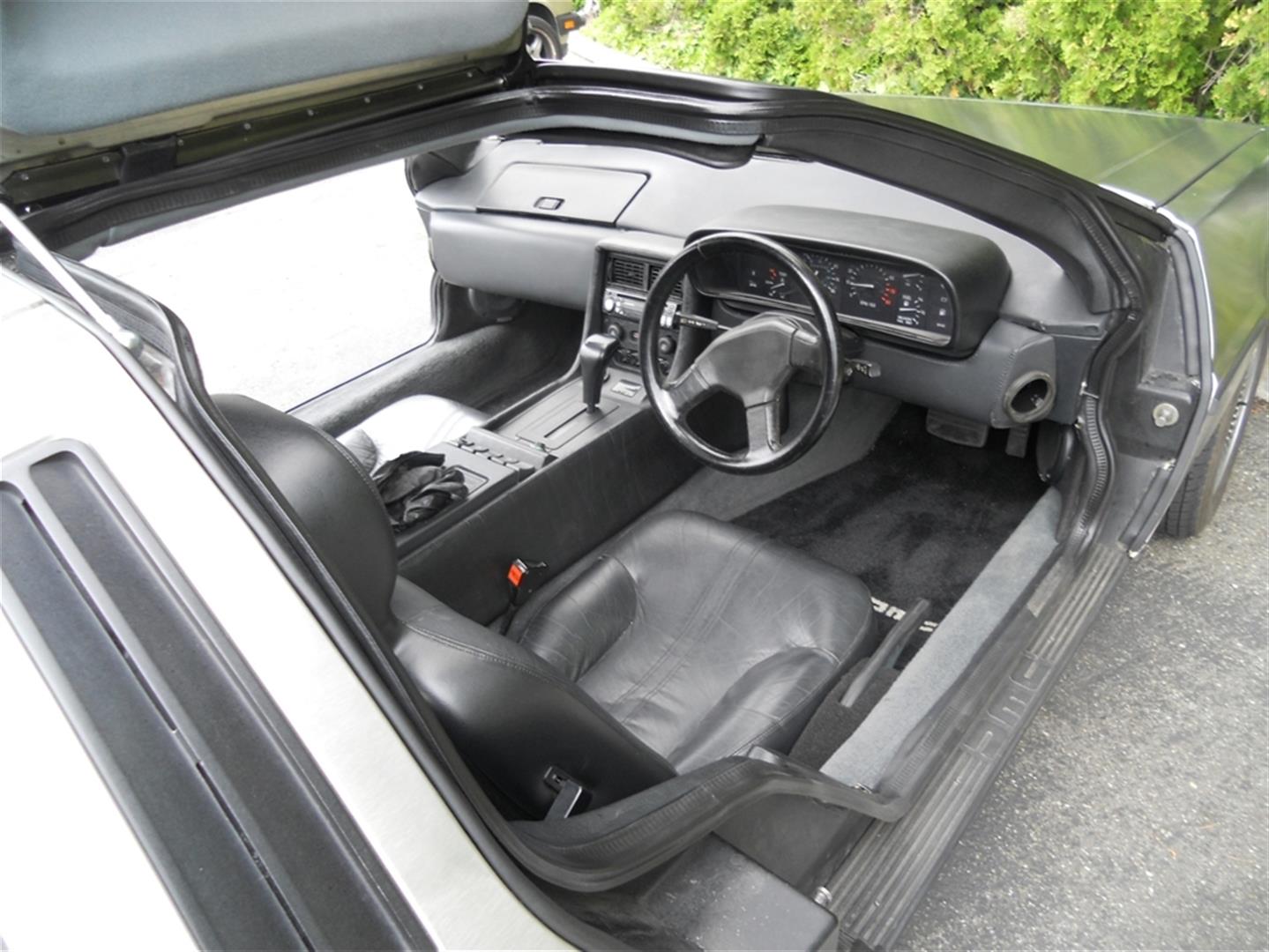 It takes so very much care and work to convert a car to right-hand drive, especially one that was never meant to be that way in the first place: stuff you’d never even necessarily think about has to be switched over, re-routed, and grafted in. I mentioned awhile back that Toby Peterson from DeLorean Parts & Service Northwest was converting an original ’81 DeLorean for an Australian customer, and now it’s finished and he’s written up an overview of the procedure for the Pacific Northwest DeLorean Club newsletter. It’s reproduced in its entirety below the jump. Take a look!

RIGHT HAND DRIVE CONVERSION, OR HOW TO FLIP A DELOREAN

Many local members have followed with interest a project that we recently completed at DeLorean Motor Company Northwest (www.dmcnorthwest.com).  The project involved taking a normal DeLorean and converting it to a fully-realized right hand drive DeLorean.  This DeLorean was purchased by one of our newest international members back in late 2010, and the plan was to perform the right hand drive (RHD) conversion and then ship the car to its new home near Brisbane, Queensland (Australia).  We set a lofty goal of completing the conversion, along with numerous other repairs and upgrades, by April of this year.  As it turned out, the project took considerably longer than expected.  The car was picked up by the transport company on August 12th, leaving a large hole in the collection of cars at the shop. There were no RHD DeLoreans built in the original factory.  A total of 16 cars were taken through a “factory authorized” conversion – 13 black interior cars were done by a company called Wooler-Hodec Ltd., based in Hampshire, England.  Three other cars were converted by another company with different methods used as compared to the Wooler-Hodec cars.  These are called the “AXI cars”.  Of note … according to Wikipedia, only one of the factory authorized conversions had an automatic transmission.  This means that there was only one factory authorized RHD black interior automatic car in existence at that time.

The Car – We started with a “typical” 1981 DeLorean sporting a black interior and automatic transmission.  The car is an early VIN with dark gray wheels, and hadn’t been licensed since 1997.  This meant that there would be a great deal of repair and maintenance needed, in addition to the conversion work, in order to have a DeLorean that would be reliable and road-worthy.  The stainless steel panels were in decent condition, with a few dings and dents suffered during its first 30 years of existence.  The frame and underbody were good, with no significant rust or other damage.  The various systems (brakes, cooling, electrical, and fuel) had the range of issues that we would expect from a car that had not been regularly driven in 14 years.  The windshield had minor damage which eventually led to a replacement.

Getting started – We decided to keep the repair and restoration portions of the project separate from the RHD conversion portion.  There were many overlaps, of course.  We completed a minimum number of repairs to allow the car to be started and driven around for a functional evaluation.  When the car was drivable, we performed a Full Technical Inspection (FTI) in order to document the condition of the many systems and components in the car.  With the report in hand that detailed all the issues that would need to be addressed for full functionality of the basic vehicle, we began the process of disassembly.  The following list of original parts would not be used in the final converted car – steering rack, HVAC air distribution box, dash board, knee pads, windshield wiper arms, and about 1/4 of the main wiring harness.  These parts and components were removed, to be replaced by new parts suitable for the RHD configuration. Vehicle Controls – The Wooler-Hodec cars featured revised brake systems with the booster and master cylinder moved to the right side of the car.  This allowed for direct connection to the relocated brake pedal.  This method also required extensive modifications to the front fiberglass underbody, including moving the spare tire well to the left side of the trunk.  We elected to leave the brake components in their original locations and utilize a sturdy torque tube and linkage system for brake controls.  This minimized changes to the underbody, and didn’t require disturbing the previously certified and safety critical brake system. The pedal box and steering column assembly were moved over, and mounted to the revised firewall on the right side.  A large bracket was fabricated in perfect alignment with the original brake controls, and a torque tube was fashioned to link the brake pedal to the brake master cylinder.  The various control stalks on the steering column were left in the original configuration relative to the steering column.  The emergency brake lever was moved from the far left side to the far right side.  The wiring in the doors was transposed from one side to the other to allow for the exterior mirror controls to be on the right hand door.

HVAC system – The rather large air distribution box in the DeLorean is located primarily in the center and right hand side under the dash board.  This necessitated a change to allow for relocation of the pedal box to that side.  The original assembly was scrapped, and replaced by an aftermarket self-contained HVAC system that could be fitted to the left side.  The new air distribution box is smaller than the original, features all electronic controls (no more vacuum mode switch), and is more efficient than the original.  One compromise with the new system is that it doesn’t have fresh air intakes, so all air conditioning is done with recirculated air.  Australian law does not allow cars to be imported with any refrigerant installed in the A/C system, so this was left “dry” for that purpose. Windshield Wipers – These represented an interesting detail in this project.  The original wipers are located such that the left hand side of the windshield is fully swept by the wiper arms, leaving a large unswept area in the upper right hand corner.  This is not acceptable in an RHD vehicle because that unswept area would impede the driver’s view.  The wiper arm pivots were flipped over to the other side, and new wiper arms were fabricated that were “bent” the other way as compared to the originals.  The wiper motor and drive mechanism were modified to rotate in the opposite direction.  This part of the conversion represented a very interesting engineering puzzle for us.  The change also required that we modify the cowl screen, and also some fiberglass work to move the holes for the wiper arm pivots.  The windshield washer nozzle was relocated to the right hand wiper arm, and pointed the opposite direction. Wiring – The entire front half of the main wiring harness was peeled to expose all the wires in each bundle, and many wires were carefully removed that would no longer be needed because of the HVAC  system changes.  The vacuum lines used for the original A/C mode switch were also removed.  The remaining wiring was flipped over and rewrapped to appear as original as possible.  This allowed the wiring to be directed to the instrument binnacle and pedal box, which were now located on the right side.  As noted earlier, the wiring in the doors was flipped to allow for relocation of the exterior mirror controls to the right hand door.

Upholstery – The original dash pad and knee pads were removed, and replaced with custom fiberglass parts.  The fiberglass forms were sent to a local upholstery shop where they were covered in the correct black vinyl and made to look as original as possible.  We decided to forego the front speaker placement under the dash, and instead mounted new speakers in the foot wells in new custom housings.  The new dash pad had the glove box relocated to the left side.  The center console was not revised, but the center HVAC control panel was changed extensively because of the new electronic system controls.

Steering and suspension – The original steering rack was removed, and replaced by a modified RHD steering rack that had been sourced from a UK-spec RHD Lotus Esprit. The Lotus steering rack had to be lengthened a bit to mount properly in the DeLorean frame.  The steering shaft that connects the steering column to the rack required only a minor revision of the spare tire well in the fiberglass underbody.  The spare tire still fit in the well.  We considered that to be a minor victory in itself. The Little Details – The move of the emergency brake lever required that the cables be flipped over to go to the other side of the cabin, forcing the cables to be routed through the battery compartment.  The shape of the battery compartment was changed to accommodate the angled wall for passing the cables through.  Also, the battery was raised up on a fiberglass platform to allow the cables to pass underneath.  The holes in the underbody where the cables originally passed through were sealed with fiberglass patches.  The cover for the revised emergency brake lever assembly was fabricated from scratch using fiberglass cloth and resin, and covered with carpet.

The center seat belt receivers were flipped to allow for the electrical circuit to encourage the driver to buckle up through the warning icon in the instrument cluster.  The speedometer drive system was left intact up to the Lambda counter mechanism.  From there, a lengthened cable would connect the Lambda counter output to the speedometer head.  All of the instruments were left as original.  The owner had requested a change to a metric instrument cluster, but we were not able to accomplish that before the car was shipped.

The original stereo was replaced with a single DIN-mount stereo head unit, and the rear speakers were replaced with new units.  The radio antenna in this early VIN DeLorean was embedded in the windshield, which we replaced due to damage incurred in the original.  In order to provide for radio reception, an electric automatic antenna was installed in the left hand rear quarter panel vent. We considered moving the trunk release handle and cable over to the right hand side, but decided that there was already too much “stuff” on that side.  In order to avoid having to open the left hand door in order to open the trunk, we installed an actuator on the trunk latch assembly, with a small momentary switch in the center console.  In order to open the trunk, you simply tap this switch to release the latch.  The owner of this unique DeLorean also wanted some upgrades and enhancements to his car in order to enhance safety, comfort, and convenience.  These included a pair of high-intensity LED third brake lights from DeLorean Parts & Service Northwest, a Wings-A-Loft DeLuxe remote door opening system, LED lights for the doors and interior, and a few other upgraded parts.

There were seemingly a myriad of other little details involved in the RHD conversion, but this article offers some insight into the more significant issues involved in a project like this.  If you have any questions regarding this conversion, please don’t hesitate to ask the author.

View the VIN page for 00966 for A LOT more photos – www.DeLoreanDirectory.com/deloreans/vin00966