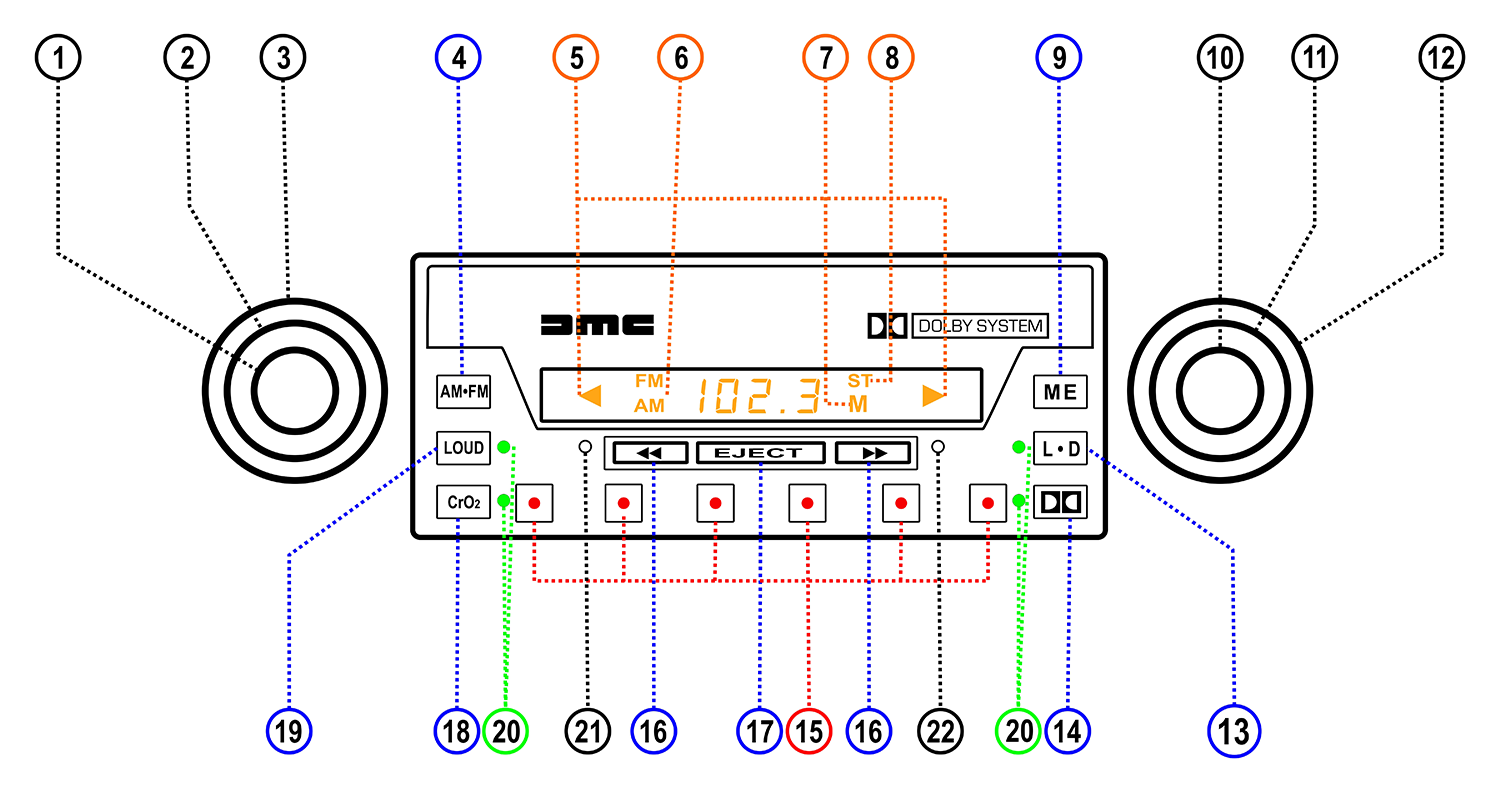 Thanks to the DeLorean community, someone out there scanned a copy of the ASI radio user manual. But, the original quality of the manual wasn’t great, so we recreated it, along with the legend map. Please do re-share and pass this around. After reading the manual, it looks like Audio Systems Inc. radio was kinda ‘high-tech’ for the day. And now you’ve ever wondered how to set the clock or what happens when you push the left knob in, here ya go. Click the cover photo for a PDF that is print-ready as a booklet, so you can print on your home printer, or at Kinko’s. (20) FUNCTION LAMPS
(ON WHEN FUNCTION IS ON)

Text version of the ASI manual

TO TURN TAPE PLAYER ON (1)
The ON-OFF switch is combined with the VOLUME control, both of which, are operated by the front knob. Turn this knob clockwise until a “click” is heard, which indicates that the radio is now “ON”. Further clockwise rotation will increase the volume.

AM / FM SELECTION (4)
The desired broadcast band is selected by the “AM / FM” Selector Button which is the button marked “AM / FM”. The radio has the FM and AM band indicators (6) located to the left of the Radio Frequency display and the appropriate indicator will light up depending on whether FM or AM band is operating.

MANUAL STATION TUNING (10)
This radio is equipped with an electronic tuner. To tune to a station manually rotate the right front knob clockwise for up scale tuning and counterclockwise for down scale tuning. The frequency will appear on the digital display area of the radio. On the AM band the frequency will appear in the steps of 10 KHz and on the FM band the frequency will appear in steps of 0.2 MHz. Each “click” while rotating the manual tuning knob will be one step on the respective broadcast band. Tune the set carefully until you are exactly on the station. This FM receiver is equipped with an automatic muting circuit. This circuit filters out virtually all off station background noise when tuning from station to station. Also, when background noise is greater than the transmitted station signal, both the station signal and background noise are muted (filtered) out.

SEEK TUNING (1)
The SEEK tuning feature of this radio automatically locates the next strong station available on the radio dial when actuated. This feature operates in the up scale direction. The SEEK tuning feature is activated by pushing in the left front knob when in the radio mode. The radio automatically locates the next strong station and stops. This procedure can be repeated by pushing the left front knob again. Repeat until the desired station is being received. For maximum sensitivity of Seek Tuning feature, the L/D button (12) should be in the distant position.

MEMORY (9)
Set pushbuttons as follows:
1. Select the desired broadcast band with the AM/FM selector button (4).
2. Carefully tune to the desired station with the manual tuning control (10) or by using the SEEK tuning feature (1).
3. Press the top right button marked “ME” for approximately ¾ second until the orange color “M” appears on the display area (7).
4. Press one of the tuning push buttons. The “M” on the display area will go out indicating the button is now preset to this station.
5. Repeat steps 2-4 for the remaining buttons.
6. Set the AM/FM selector button (4) to the other broadcast band and set the six push buttons in the same manner as above.

NOTE: THE ELECTRONIC CONTROL FUNCTIONS IN THE RADIO WILL NOT OPERATE PROPERLY IF POWER TO THE RADIO IS INTERRUPTED. THE POWER INTERRUPTION COULD BE CAUSED BY DISCONNECTION OF THE BATTERY, OR LOW BATTERY VOLTAGE AS MAY OCCUR IN COLD WEATHER STARTING. DISCONNECTION OF THE BATTERY WILL CAUSE LOSS OF PUSHBUTTON STATION MEMORY AND THE TIME. THE MEMORY AND CLOCK WILL REQUIRE RESETTING WHEN POWER IS RESTORED. LOW BATTERY VOLTAGE WILL CAUSE FAILURE IN THE SEEK TUNING OPERATION. THE SEEK TUNING WILL OPERATE PROPERLY WHEN POWER IS RESTORED.

STEREO INDICATOR LIGHT (8)
An FM Stereo light, “ST”, is located on the right side of the display area. This light will glow whenever the radio is tuned to an FM stereo station who’s broadcasting signal is of sufficient strength. If the stereo signal begins to weaken the radio will automatically blend to monaural reception. The mono mode will increase the radio’s ability to receive the weak signal. As the signal strength returns to a sufficient level the radio will automatically return to the Stereo mode.

When the radio is in the Seek Tuning mode, this feature allows the user to discriminate the strong stations from week stations on both the am and FM bands. Your radio should be in the ‘DISTANT’ mode for the best reception under most conditions, an exception would be in an urban area with tall buildings.

TREBLE CONTROL (2)
The trouble response can be adjusted to the desired level with the middle knob on the left side of the radio. Rotating clockwise increases the treble and rotating counterclockwise decrease is the response. There is a detent Position at the middle point of the knob’s rotation.

FADER CONTROL (FRONT-REAR) (12)
Adjust the fader control, the rear knob on the right side of the radio to the point where the volume appears equal between the front and rear speakers.

CLOCK OPERATION
With the ignition switch in the ON position and the radio on or off, the time of day will be displayed on the radio display. The audio frequency can be displayed by pressing the “CRO2” button (18) or the Dolby NR button (14). the time will reappear after about 5 Seconds. The time is also displayed when the tape player is operating.

Insert the tape cassette into the tapes lot until it locks into position. The unit is automatically switched to the tape player operation and one of the green tape direction indicators (5) located on either side of the display area will be on. The various lights shown when the radio is on will not light up. They will come back on when tape is ejected and the lights relating to the cassette operation will go off.

PROGRAM CHANGE CONTROL (1)
When the tape program reaches its conclusion the tape player will automatically reverse the tape Direction and play the other program. To manually change the tape Direction, push in the Volume control knob (1). the proper tape direction indicator (5) will light.

FAST FORWARD (18)
The control button marked with arrows pointing in the same direction as the tape, as indicated by the lit tape direction indicator light, (5) will increase the tape speed when depressed. This function allows the location of other sections of the tape program. The button will lock when depressed fully in word. It can be released by partially pushing in the Eject button. When the button is released, the unit will play at normal speed.

EJECT (17)
To eject the cassette push in firmly on the “EJECT” button and the cassette will be partially ejected from the tapes lot. The unit is automatically switch to radio operation. AN IMPORTANT POINT – DO NOT LEAVE THE CASSETTE IN THE PLAY POSITION WHEN YOU TURN THE RADIO OR THE CAR ENGINE OFF.

DOLBY NR (NOISE REDUCTION) CONTROL (14)
This tape player, is equipped with a noise reduction circuit developed by Dolby Laboratories. It reduces to a minimum the noise commonly referred to as “tape hiss” and improve the reproduction of the high frequency sounds. This circuit will best effect tapes recorded using the Dolby NR process. They will be identified by the “Double-D” symbol and the words “DOLBY SYSTEM” printed on the label. The tape players Dolby NR circuit is controlled by the bottom button on the right side of the radio Mark with “Double-D” symbol. Press the button when playing tapes recorded with the Dolby Noise Reduction process. The function is ON when the lamp is ON.

TAPE EQUALIZATION CONTROL (18)
The button in the lower-left corner of the radio marked “Cr02” select the proper tape Equalization value of 120 microseconds for normal tapes and 70 microseconds for Chrome tapes. Push the button when using hi-bias chrome tape to achieve more faithful reproduction. The function is ON when the green light ON.